The Internet Of Things: Mousetraps and Supply Chain Contraptions

The Internet Of Things: Mousetraps and Supply Chain Contraptions


So in case you haven’t heard of The Internet of Things, usually stylized as IoT, it’s the process of putting devices on the Internet that don’t necessarily have traditional interfaces (like screens and keyboards) or do traditional things (like display your favorite subreddit). Instead, they are devices that connect to the physical world; measuring, monitoring, controlling and providing alternative human interfaces.

More and more devices have IoT baked in. Refrigerators, thermostats, fire alarms, washing machine and dryers are all starting to have IoT baked in. Admittedly, we’re just at the beginnings of what’s possible. Most of the devices are just providing varying levels of notification. Command and control is still to come. There are security and safety issues to consider but have no fear, these issues will be addressed and then we’ll be into the real promise of IoT.

Tesla’s electric vehicles are IoT-enabled. Via their mobile app, you can check the status of your battery charge or turn on the air conditioner so you can climb into a cool car on a hot day.

Being Makers, the segment of IoT that we’re most excited about is the plethora of modules and components that allow you to add and integrate Internet-connectivity into non-enabled devices. Using these inexpensive modules, you can add a variety of communications and control to most any project. Here are a couple that we’re working on:

Build a better mousetrap and the world will beat a path to your door, the saying goes. And that’s what we’re doing. Combining 3D printing and Photon’s Particle WiFi module, we’re creating a mousetrap to humanely catch mice and then let you know via a text message or Tweet. This way you can take the little critter outside and set him free. I recommend your neighbor’s garage.

Now this project is mainly a proof of concept and while we expect it to catch its share of mice, it’s nothing we’re going to put in a box and try to sell. It’s a learning platform for us, a way to better understand the special situations, interface challenges and engineering issues that melding the online with the offline often brings.

One important lesson that we’re learning is the patience of IoT devices. They love nothing more than to sit there and monitor one thing, all day, every day, for as long as you give them power. Couple this patience with the ability to hand-raise; to let you know that they’re still on the job on a periodic basis, and you’re starting to build a system that you can trust and rely on.

We’re also finding that you can take simple sensors and extrapolate more complex behavior out of them. For instance, the mousetrap senses a mouse and the doors swing shut. You’d expect him to freak out a bit, running back and forth. This running will continually set off the sensor that closed the door in the first place. So now your system know that if the doors are closed, the sensor should be tripped on a regular basis. If it’s not, the system can assume that the mouse was too fast or something spurious tripped the sensor. Maybe a bug or leaf, who knows, but you can have the system programmatically make a decision to reopen the doors and begin waiting for the next mouse to come along. A couple of false triggers in a row and then the system sends you a message that something might be wrong. Perhaps a built-in, low-res camera takes a picture of the inside and sends it to you so you can see what might be going. All without crawling behind the refrigerator.

We’re also developing an inventory management and order fulfillment system for an e-commerce warehouse. Again, interconnected WiFi modules with simple interface elements, like colored lights and tiny dot-matrix screens, guide workers through the warehouse, allowing them to efficiently pick, sort and ship orders. Complex behaviors are divined through groups of simple sensors.  Conversely, aggregated interface elements craft an easy to understand narrative for the worker to execute on and the administrators to gather comprehensive stats on the overall process. These stats can then be used in a process of continual refinement and improvement.

Like the early days of the Internet, it’s a Wild Wild West of sorts and security is often an afterthought. We’re already starting to see significant security issues arising. The recent hacks of the Jeep and other high-profile connected devices are increasing scrutiny on the security of these devices. We’re very cognizant of the security aspects of what we’re doing, and we’re always looking to leverage solutions with robust security baked in. It’s one thing for your computer to contract a virus and start sending spam or shamble on in a zombie bot network, it’s another thing entirely for your household appliances to start filming you surreptitiously and your car to start logging into your bank account. 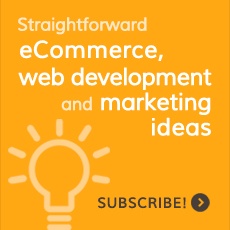